Well, the single-payer crowd is gleefully touting the latest Commonwealth Fund study as if it settles the health care debate in their favor. Here’s the chart that has set their hearts aflutter: 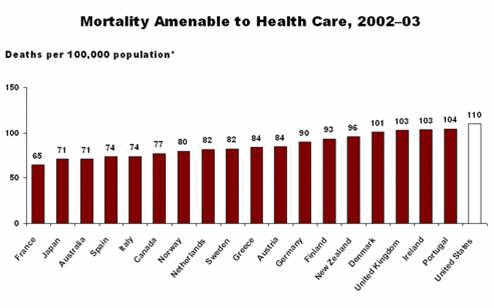 Looks bad. But, as is often the case with the Commonwealth Fund, there is less here than meets the eye. The most significant problem with the study is its data source:

For this study, the researchers used data from the World Health Organization on deaths from conditions considered amenable to health care …

Using W.H.O. data to compare these kinds of outcomes is a very dodgy business. Why? Because accuracy in diagnosing and recording causes of death varies wildly from nation to nation. That’s why the W.H.O. issues the following warning:

Comparison of cause of death data over time and across countries should be undertaken with caution … coding underlying causes of death involves some extent of misattribution or miscoding … incorrect or systematic biases in diagnosis, incorrect or incomplete death certificates, misinterpretation of ICD rules for selection of the underlying causes.

The people who produced the “study” were apparently heedless of this warning. They have therefore produced the mother of all apple-to-orange comparisons. That hasn’t given a moment’s pause to the single-payer crowd.

But, then again, facts have never mattered much to the advocates of government-run health care.