Paul Krugman of the New York Times is one of the most mendacious commentators on health care in the mainstream media. See my essay The Health Care Lies of Paul Krugman – and this entertaining video. Enjoy!

Hannity ran a segment on the First Lady’s patient-dumping scheme, and they interviewed me pursuant to an article I wrote about it several months ago. Here’s where the rubber hits the road on the “Urban Health Initiative”:

EARHARDT: According to community activist Shannon Bennett, this has led to a backlash among South Side residents.

SHANNON BENETT, KENWOOD-OAKLAND COMMUNITY ACTIVIST: We hear about the university is saying as their purpose of what they want to do. And we see something different. And what see different is that how they leave them out in the cold.

EARHARDT: He’s also skeptical of the program’s claim that patients directed away from the hospital are receiving better care at local clinics.

BENNETTE: They are not getting better care. And part of what the issue is that, these clinics are usually staffed by the county, and to my understanding, that service, of course, is nothing comparable to what you’re going to get at the University of Chicago.

EARHARDT: Health care professional David Catron has spend over 25 years in the business and agrees with Bennett’s assessment.

DAVID CATRON, HEALTHCARE CONSULTANT: The Urban Health Initiative is not about charity. It’s about reserving beds in the University of Chicago Medical Center for well-heeled, well-insured patients.

EARHARDT: In fact, he goes even further, calling the initiative a patient-dumping scheme, a practice outlawed by President Reagan back in 1986.

CATRON: If it doesn’t violate the letter of the law, it certainly violates the spirit of the law. It is patient-dumping.

Open for comments
Share this post: These icons link to social bookmarking sites where readers can share and discover new web pages.
QUESTION FOR PETER SINGER: WHO’S “WE”?

The other day, Peter Singer quoted me in his New York Times piece, Why We Must Ration Health Care:

In the conservative monthly The American Spectator, David Catron … asked whether we really deserve a health care system in which ’soulless bureaucrats arbitrarily put a dollar value on our lives.’

For anyone familiar with Singer’s positions, which include the advocacy of infanticide in certain situations, it will come as no surprise that his answer to my question is “yes.”

The task of health care bureaucrats is then to get the best value for the resources they have been allocated. It is the familiar comparative exercise of getting the most bang for your buck.

This assertion is an excellent argument for not giving those bureaucrats our bucks. It also highlights what Singer and other advocates of government-run health care mean by “we.”

During last year’s presidential race the Obama campaign accused John McCain of wanting to “tax health care instead of fixing it.” And this accusation probably contributed to McCain’s demise.

Thus, many were outraged when our new President and his congressional accomplices proposed a very similar health benefits tax—-minus McCain’s $5,000 tax credit.

But a funny thing happened during the the July 4 congressional recess: several public opinion polls revealed that the voters still don’t like the idea of a health benefits tax:

Sen. Kent Conrad, D-N.D., said that public polls conducted over the July 4 congressional recess and reviewed by senators are causing lawmakers to have second thoughts about limiting the tax exclusion for employer health plans.

In other words, the Dems are cowards as well as hypocrites. You can bet, however, that these thieves will find some way to raise your taxes. It’s what they do best. 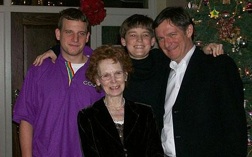 Having government-provided health insurance doesn’t do a lot of good when the health care is delivered by apathetic, uncaring, unionized, government health workers.

Consider this story (July 5, 2009) in the UK’s Telegraph newspaper:

Cancer patient Pamela Goddard battled against cancer for 50 years before she died of an infected bedsore during a stay in hospital.

The cancer did not kill her, but a bedsore did.

What appeared to be the start of one was noted on her back as she was admitted for radiation treatment in September and it was allowed to gradually develop into a “raging sore” which left Mrs Goddard moaning in pain.

During four weeks of what her family describe as “torture” in a bed in East Surrey Hospital, the sore resulted in a fatal blood infection and she died on October 27.

Her son Adrian Goddard, who lives in the US, said: “She survived cancer for 40 years, then died from a bedsore.

“It is just beyond belief that they could let a bedsore develop to the point where it actually kills someone from septicaemia.”He said the nurses seemed largely unconcerned by the growing size of the sore and his mother’s increasing pain.”

The bedsore was painful. There were various procedures that should have been done. You are supposed to debride the thing, clean it, treat it.”

She was supposed to be lifted and moved so there’s not constant pressure on it,” Mr Goddard said.”There were explanations like ‘there was only one nurse and it wasn’t possible to do it or the equipment was broken’… just a series of excuses.

Of course, the Obama administration denies that UK socialist-style health care cost containment is on the horizon. They prefer the approach of having government pay for health care while hospitals and doctors remain nominally private. However, the Obama approach is like that taken in Canada where stories of hospital neglect – just like in the UK – are reported with great regularity.