A new video produced by the National Center for Policy Analysis features Canadian medical broker Rick Baker of Timely Medical Alternatives who has appeared in several of our health care films. This piece serves as a warning from someone who sees suffering and waiting Canadians on a daily basis.To sign the “Free Our Health Care Now!” petition, visit their website.

The Independence Institute in Colorado has just produced a good video explaining how individual mandates have worked in Massachusetts with the following introduction:

We all agree the health care system is in need of reform. That’s not the issue. The debate is really what kind of reform is needed. There are those rooting for nationalizing health care – Obama Care. What’s that you ask? Obama’s idea of reform is a government takeover of the health care system. One of the most popular forms of government takeover is the “Massachusetts Model.” Those of us opposing “reform” that involves yet more government interference, wish to see a system that incorporates more consumer choice and more competition. Take a minute to watch this new video outlining just one of the many reasons the Massachusetts model has failed.

It’s a shame that ABC’s infomercial for Obamacare bombed so badly in the ratings. It provided genuine moment of clarity.

A skeptical physician asked Obama if he would be willing to submit his own family to the limitations of a public plan such as he has proposed for the rest of us:

Devinsky asked the president pointedly if he would be willing to promise that he wouldn’t seek extraordinary help for his wife or daughters if they became sick and the public plan he’s proposing limited the tests or treatment they can get.

Guess how the President answered:

The president refused to make such a pledge, though he allowed that if ‘it’s my family member, if it’s my wife, if it’s my children, if it’s my grandmother, I always want them to get the very best care.’

In other words, the President wasn’t willing to commit his own loved ones to the tender mercies of his own health care plan.

That’s all you need to know about Obamacare.

Open for comments
Share this post: These icons link to social bookmarking sites where readers can share and discover new web pages.
NO TO PUBLIC PLAN”>AMA SAYS NO TO PUBLIC PLAN

A few weeks ago, it looked like the AMA might collaborate with the President in his effort to dismantle U.S. health care, presumably in the hope that groveling would prevent reimbursement cuts for its membership.

But the President was playing the AMA leadership for chumps. He plans to push through the “public option” and to force doctors to participate in the program. This caused an epiphany at the AMA:

As the health care debate heats up, the American Medical Association is letting Congress know that it will oppose creation of a government-sponsored insurance plan, which President Obama and many other Democrats see as an essential element of legislation to remake the health care system.

It will be interesting to see if the AMA can influence the outcome of the “public option” debate. The organization once wielded considerable power inside the Beltway, but not so much these days.

One thing is certain: Collaborating with Obama won’t get the AMA anywhere. He’s going to doublecross the health care stakeholders whenever it is politically expedient.

If you think that government-run medicine will solve the problems in our health care system, listen to this sobering testimonial on socialized medicine in the UK:

The National Center for Policy Analysis, The Mike Gallagher Show and the Salem Radio Network have authored the “Free Our Health Care Now!” online petition. They hope to deliver hundreds of thousands of online petition signatures to Congress to stop ObamaCare in its tracks. Sign the petition now! 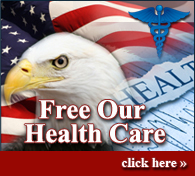